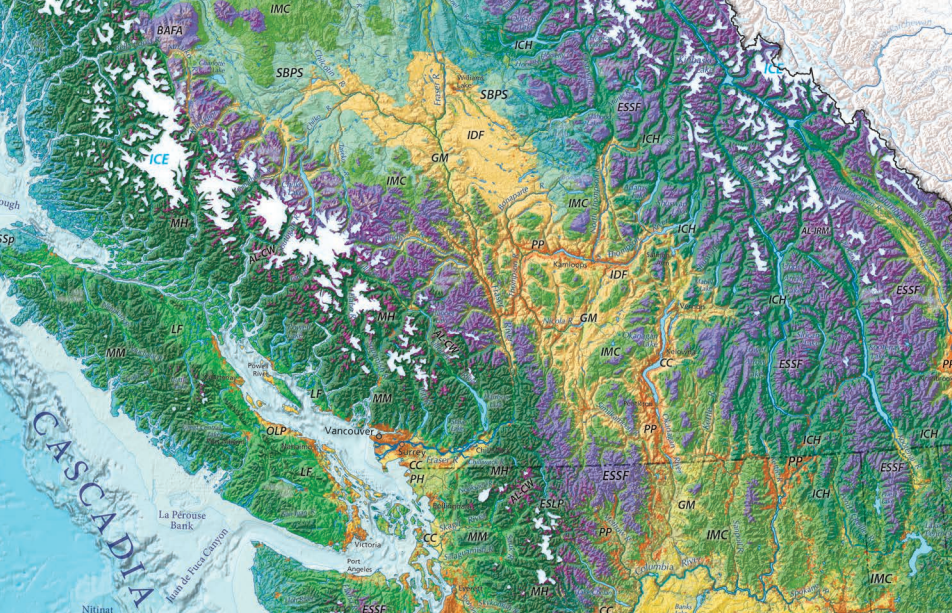 THERE’S LITTLE NATURAL ABOUT THE BOUNDARIES THAT DIVIDE STATES AND COUNTRIES. THEY’RE OFTEN IMAGINARY LINES THAT RESULT FROM HISTORY, CONFLICT, OR NEGOTIATION. BUT IMAGINE WHAT THE WORLD WOULD LOOK LIKE IF BORDERS WERE SET ACCORDING TO ECOLOGICAL AND CULTURAL BOUNDARIES.

The Cascadia Bioregional Party seeks to do everything possible to align our political and administrative districts with boundaries that make sense, and are representative of the place, the people and our inhabitants. We seek to align our proposed administrative frameworks, policies and boundaries within a bioregional context in a way which greater reflects the natural and cultural realities of our home, rather than arbitrary lines on a map often created by people who never set foot here. We believe that every person and community impacted by a decision are the best able to speak to their needs, and in building systems based on mutual support and empowerment, rather than disenfranchisement, gerrymandering and exclusion. Bioregions are the natural countries of the planet, containing within them many nations, inhabitants, watersheds and ecosystems. Culture stems from place.

Stretching for more than 2500 miles along the Pacific Coast, the Cascadia bioregion is comprised of 75 distinct ecoregions that spread across an incredible diversity and range of habitats, wilderness and landscapes. These watersheds stretch from South East Alaska to Northern California, and from the crest of the continental divide to the Pacific coast westward. The area’s biomes and ecoregions are distinct from surrounding areas. The resource-rich Salish Sea (or Georgia Basin) is shared between British Columbia and Washington, and the Pacific temperate rain forests, comprising the world’s largest temperate rain forest zone, stretch along the coast from Alaska to California.

By creating a place based politic – sharing our land, air, food and water; regardless of personal belief we will have shared values, and common concerns rather than a distant seat thousands of miles away with no vested interest in our place or people.

If there is a fire, it affects all of us. If there is a drought it affects all of us. If there is an earthquake or volcano eruption, it affects all of us. Seattle is a mere 180 miles away from Vancouver BC, and yet it is divided by an international line due to simple accidents of history. The Columbia River watershed alone, Cascadia’s largest waterway, includes parts of six US states and one Canadian province. Its border is traced, “not by governments or treaties, but by every drop of liquid that finds a common path to the ocean”. If we ever want to talk about true sustainability, energy independence or food sovereignty, restoring salmon runs or negotiating dams along the Columbia river, especially in the arid West – that conversation will involve everyone involved. As long as we remain a part of our respective federal governments, a hodgepodge of competing corporate and government interests not even rooted here  – we will never be able to live as efficiently, democratically or equitably as the way we need to.

Bioregionalism is a movement, an ethic and idea that has been growing for more than four decades which seeks to do just that, by using natural features such as mountain ranges, and rivers as the basis for political and cultural units, rather than arbitrary lines on a map. Together, it is a political, cultural, and ecological set of views based on naturally defined areas called bioregions. At it roots it is a way to restructure society to work within each given region, rather than transforming each to human needs. These watersheds, like Cascadia does, transcend arbitrary borders, and are critical in understanding where our water comes from, and where it goes, as well as engaging with all of the communities affected by that discussion.

Bioregionalism stresses that the determination of a bioregion as also a cultural phenomenon, and emphasizes local populations, knowledge, and solutions. It is both societal, but also deeply personal. A bioregion’s environmental components (geography, climate, plant life, animal life, etc.) directly influence ways for human communities to act and interact with each other which are, in turn, optimal for those communities to thrive in their environment. As such, those ways to thrive in their totality—be they economic, cultural, spiritual, or political—will be distinctive in some capacity as being a product of their bioregional environment.

Our goal is to help humans collectively re-inhabit the continents and bioregions that they live within. We encourage lifestyles that are healthy and democratic, self resilient communities living within the a sustainable carrying capacity for their area, and more so working to actively regenerate their region and world. Why should Spokane in eastern Washington be a part of the same state as Seattle in the west? Why should Medford in Southern Oregon be a part of the same state as Portland in the North? Cultural realities that arise from these two place are dramatically different, and by decentralizing governance down to local communities, strongly enshrining personal freedoms, civil liberties and personal protections for every inhabitant by creating shared agreements where our needs and interests overlap, a lighter weight, more representative bioregional approach can be applied in which everyone comes off happier.

Ultimately, we will never accomplish real change by working within the cartography of the systems creating the very problems we are trying to solve, nor will we be able to achieve a future that we cannot clearly envision or articulate. Instead, new maps will be needed, and new processes that involve all of us required. Just as we must work to democratize the ways we live and the societies we live in, a new form of map making is needed.

Creating these holistic cultural, economic, ecological and democratic systems are why ideas like Cascadia are so important.